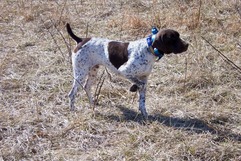 LB's OHI Shameless Re-Pete is an old pro GSP that has already sired several litters of outstanding pups. Pete's disposition makes him a great companion in the field and the home.  He has a very gentle nature, but is nothing but serious in the field.  He is easy to handle and a natural in the field. 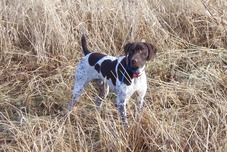 LB's OHI Shameless Rock, a German Shorthair Pointer, is another of our proven stud dogs.  Rocky is a direct brother to Pete and equally as terrific in the field.  He has unsurpassed intensity when he is locked on point.  Rocky has sired many outstanding litters.  Puppy owners have reported that their dogs are nothing but exceptional. 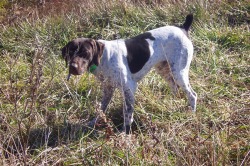 Timbercreek's Shameless Caesar, who is the son of LB's OHI Shameless Re-Pete and Copperhead Abbie Gal, was pointing, backing and retrieving to hand, all at only five months old!  He has terrific natural ability that he continues to pass down to his pups. He has an outstanding pedigree that includes NFC, HOF, FC, LB's OHI Shameless; NFC, HOF, FC, Diamond S Stephanie; NFC, AFC, HOF Rusty's Blue Earth Rexx; and FC Dixieland Rusty. 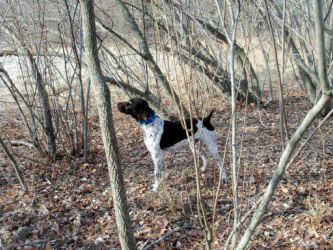 Gunnar was a two year old German Shorthair Pointer when this picture was taken.  This picture was taken near the end of the 2011 hunting season as he was pointing a large pheasant.  He is from the 2009 litter  of Timbercreek's Shameless Caesar and Timbercreek's Reba.  Gunnar has proven to be an outstanding dog.  He was a natural at a very young age at pointing, backing, and retrieving. Check out some great pictures of him on some trips to Montana. 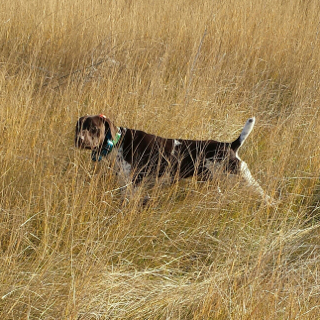 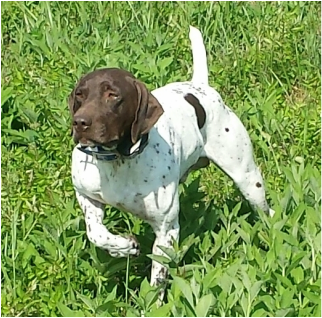 Timbercreek's Shameless Mickey is the son of LB's Ohi Shameless Pete and Bronco Sally's Sweet Love Lady. His grandfather is NFC L B's Ohi Shameless as well as a long history of champions on both the dam and sire sides of his pedigree.  Mickey is a bird finding machine with loads of style. He has recently taken up field trial competition. 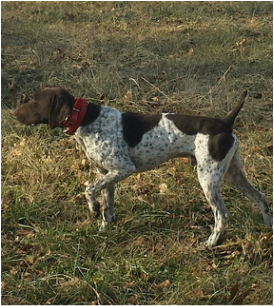 Lakota Scout is the son of L B"s Ohi Shameless Rock and Timbercreek's Crosswind Truckin' Gerty. His grandfather is sixteen time NSTRA Champion, three time National Champion,  and Hall of Fame dog Crosswind Truckin' Fritz and National AKC Champion and Hall of Fame dog L B's Ohi Shameless.  Scout is one of the newest members of our kennel and he is an outstanding addition. 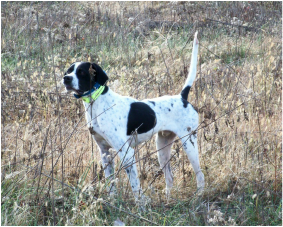 Buddy is an English Pointer whose sire is Elhew Sea Gazer and his dam is Numark Elhew Penny.  He has Hall of Fame Elhew Snakefoot on both sides of his pedigree.  Other champions in his bloodline are Elhew Sea Wolf and Elhew Fibber McGee. He is proving to be an outstanding dog in the field and has great style on the point.  He loves to hammer the birds from the word "go".  He is an excellent retriever and cover the ground like a dream.